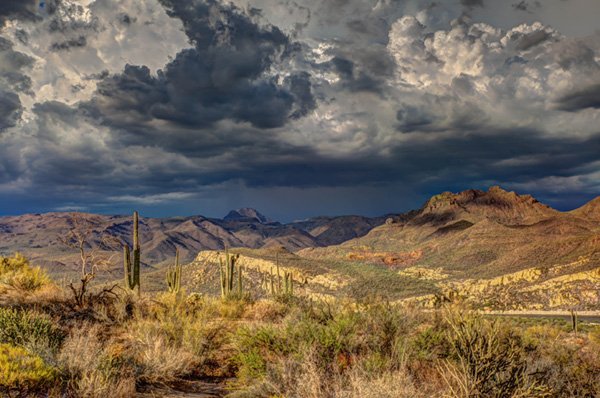 I love our Arizona desert in the summer.  Sunsets, bats, monsoon storms, stars, planets, owls, nighthawks, swimming, dust storms, haboobs, rattlesnakes… there is so much here to love.  And this is the time when most people want to leave for the summer.  Vacations to escape the heat are a ton of fun, but all summer?  For those of you who leave town, consider sticking around for a bit, especially during monsoon season – you won’t regret it!

Just when seasonal residents start to leave town, other seasonal residents return.  Bats and nighthawks that migrated south for the winter return in late spring to enjoy the insects in our summer evening skies.  Nighthawks can can be recognized with their long wingspans and fluttering flight, and will appear along with bats after sunset.

The first things to appear in our summer skies after sunset are Venus in the west and Jupiter in the south, followed later by Mars rising in the southeast at around 9:45.  For a couple of months starting in July, Mars will shine its brightest since 2003 and will be even brighter than Jupiter.  It can be easily recognized by its orange color.  Here is a fun way to remember the big three – I could go to bars on Mars or go to Jupiter and get stupider, but I’d rather go to Venus and be genius ?.   Great resources on all the visible planets are timeanddate.com and earthsky.org

In the north sky, the Big Dipper reliably hangs and points to the north star.  Runaway slaves called it the Drinking Gourd and sang songs to remember the stars that led them northward to freedom.  The brightest star in the Northern Hemisphere sky is Arcturus, a red giant over 7 billion years old and near the end of its lifespan, expanding and shining at about 170 times the brightness of our sun.  A handy guide to the night sky, like the Star Chart app, can be downloaded right to your phone.

At sunset, cicadas start their evening chorus and then as dusk turns to darkness, cicadas fade out and the crickets begin their song.  Anybody who has frequently gone hiking here after dark to beat the heat has also likely seen or heard a rattlesnake.  One time I lost my drivers license because I was so excited to pull out my phone to take a picture, the license came out too.  The pictures never did come out, but I get a chuckle at the memory, and a kind hiker found my license on the path and mailed it back to me.

Starting in July, the most amazing fireworks you will see in the sky are produced by Mother Nature herself, lightning bolts that flash up the sky and make us feel more alive.  This signals the beginning of monsoon season, a glorious time of heavy rains, strong winds, lightning, thunder, hail, dust storms & haboobs, puffy & dark cumulous clouds, and SUNSETS that are arguably among the MOST BEAUTIFUL in the world.  Personally, the monsoon season is my most favorite and memorable part of summer here. I still remember gazing at awe, 22 years ago when I first moved here from Tennessee, watching a group of clouds in the distance that was filled with bolts of lightning, not one of them touching the ground, but just flashing from one part of the clouds to another.  Or another time when my daughter bravely raced outside during a downpour of hail to find a pigeon we had earlier rescued after a flight injury.

WHAT DO YOU LOVE?

Maybe if my job involved working outside in the heat, I wouldn’t love it so much (hats off to all the men and women who do).  But anyway, what are some of the things you love about Arizona in the summer?  Email your thoughts to info@scottsdalebedrooms.com and I’ll post them below.  I look forward to hearing from you!   -Travis